It has been an interesting week. A dog trainer friend of mine, Karolin Klinck, brought the following story to my attention. With anticipation I followed the development in Germany involving well-known American television star and controversial dog trainer Cesar Millan better known as The Dog Whisperer.

Cesar Millan's intent was to invite 5 people with their dogs to his show. These people were to be chosen about 4 hours before each show and would go on stage for a period of up to 10 minutes in which Cesar Millan would handle the dogs. The conflict arose due to the possible negative consequences that could evolve due to the short interactions with Mr. Millan. A possible follow up training session and/or consult may be required after the show and therefore according to German law the trainer needed to have proof of knowledge on the field of dog training and behavior.

According to the German newspaper "Hannoverische Allgemeine", a Veterinarian met Mr. Millan at the airport for the test. According to Mr. Millan's spokesman Florian Wastl "That was unfortunate. Mr. Millan failed the test due to linguistic problems." although an interpreter was present but Mr. Wastl claims "a lot was lost in translation." This was contradicted by city spokesman Udo Möller: "The test was taken in a correct manner. We are not here to boycott the dog trainer from the United States but we just want to ensure that part of his show is performed by a trainer who as a corresponding competence certificate in the field." he stated. 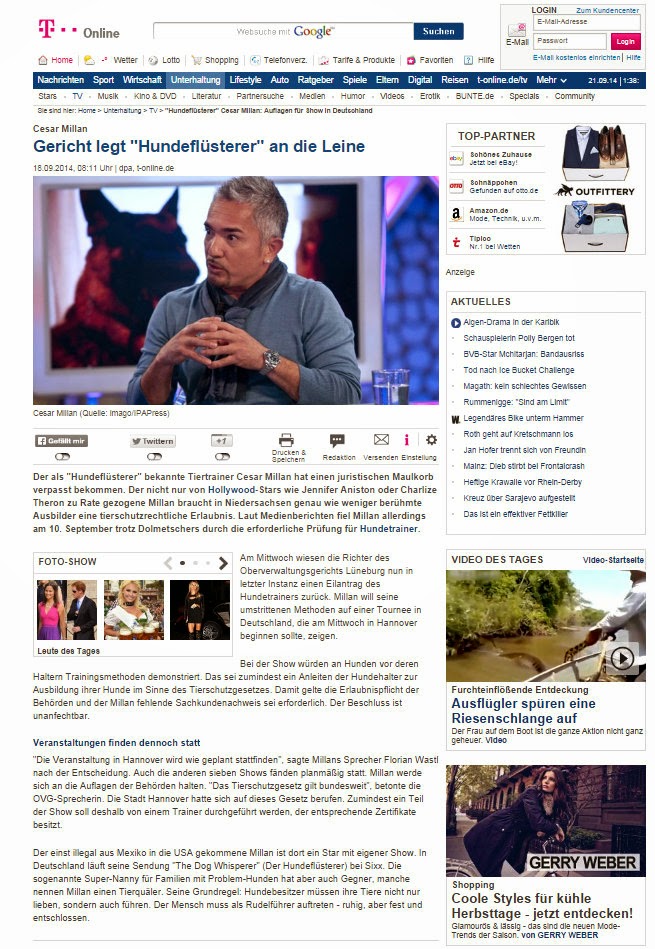 Link to above mentioned article: T-Online.de

"Cesar Millan, an animal trainer known as the "Dog Whisperer", has received a legal slap on his fingers. stars such as Jennifer Aniston and Charlize Theron have sought Mr. Millan’s advice but Mr. Millan needed an animal welfare law permits like any other less famous dog trainer. According to media reports, however, Millan failed the required exam for dog trainers on September 10, despite a present interpreter.

On Wednesday, the judges of the Supreme Administrative Court of Lüneburg, refused an urgent application of the dog trainer. Millan wants to show his controversial methods on tour in , which was to begin on Wednesday in .

In the show training methods would be demonstrated on dogs with respectively their handlers. That would require the handler to handle the dogs within the terms of the Animal Protection Act. This applies the licensing requirements of the authorities and Mr. Millan’s lacked the proof of competence which is required. The decision is final.

"The event in will take place as planned," said Millan's spokesman Florian Wastl after the decision. The other seven shows were taking place as planned as well. Millan will comply with the requirements of the authorities. "The Animal Welfare Act applies nationwide," said the spokeswoman of the . The city of had invoked this law. At least a part of the show should therefore be carried out by a trainer who has appropriate certificates.

The once illegal immigrant from came to the and Millan is a star there with his own show. In his show " The once illegally from have come into the United States Millan is there a star with his own show. In his show " Der Hundeflüsterer " (The Dog Whisperer) is running at Sixx. However, the so-called Super-Nanny for families with problem dogs also has enemies. Some call Millan an animal abusers. His principle: Dog owners have their animals not only love, but also lead. Man must occur as the pack leader - quietly but firmly and decisively.
Controversial training methods

Millan's crackdown on problem-dogs are based on punishment, submission and threatening gestures, the animal welfare organization Four Paws complained recently. "This in no way represents our current scientific knowledge", criticized the association for the German Kennel Club and accuses Millan of "violent emphasized techniques such as punches, kicks, choke collar, electric stimuli".

Millan rejected this: ". understand you do not know who Cesar Millan really is. I'm the biggest fan of dogs on this planet," he announced in Spring confidently."

Here are questions to tests that are given to dog owners that handle dogs (not trainers!). We haven't been able to locate any dog trainer tests online. The dog trainers test is more complex. If we can get our hands on it we will post it. Example of dog owner's test:

Here are links to the test requirements: http://www.doq-test.de/.

The interesting part is that some of the questions are based on outdated information. That has been criticized by some German dog trainers. We may assume it was those questions that Mr. Millan may have gotten right. Nevertheless, it is a start to help ensure that in the name of the dog a dog trainer needs to have some background in dog training and behavior. Becoming a dog trainer is not going to be an overnight decision but requires some education and knowledge.

Thank you Mona Steffi Glen Fallon and Angela Reiss for providing us the links. I will be providing a translation soon!

While Cesar Millan fans are crying bloody murder the decision has been highly welcomed by animal advocates and trainers of modern and scientific based dog training methods. His methods have been doomed outdated, brutal and painful. Many of his opponents have contributed his success to his ability to empower humans but using horrendic methods to control and submit defenseless dogs. His fans contradict these accusations by saying people are against him because he is successful and that draws jealousy and hate towards him. No matter what side you are on, the decision in Germany made another contribution to the endless bickering about dog training methods.

What dog training method is right for you? I think we should start thinking about using methods that support the welfare of our dogs. Methods that are humane. Methods that don't use corrections on verbal or physical level. Methods that use motivation and that can achieve the same results without the long term negative consequences. That method is called aversive free or force free dog training. We do have those options so why not use them? 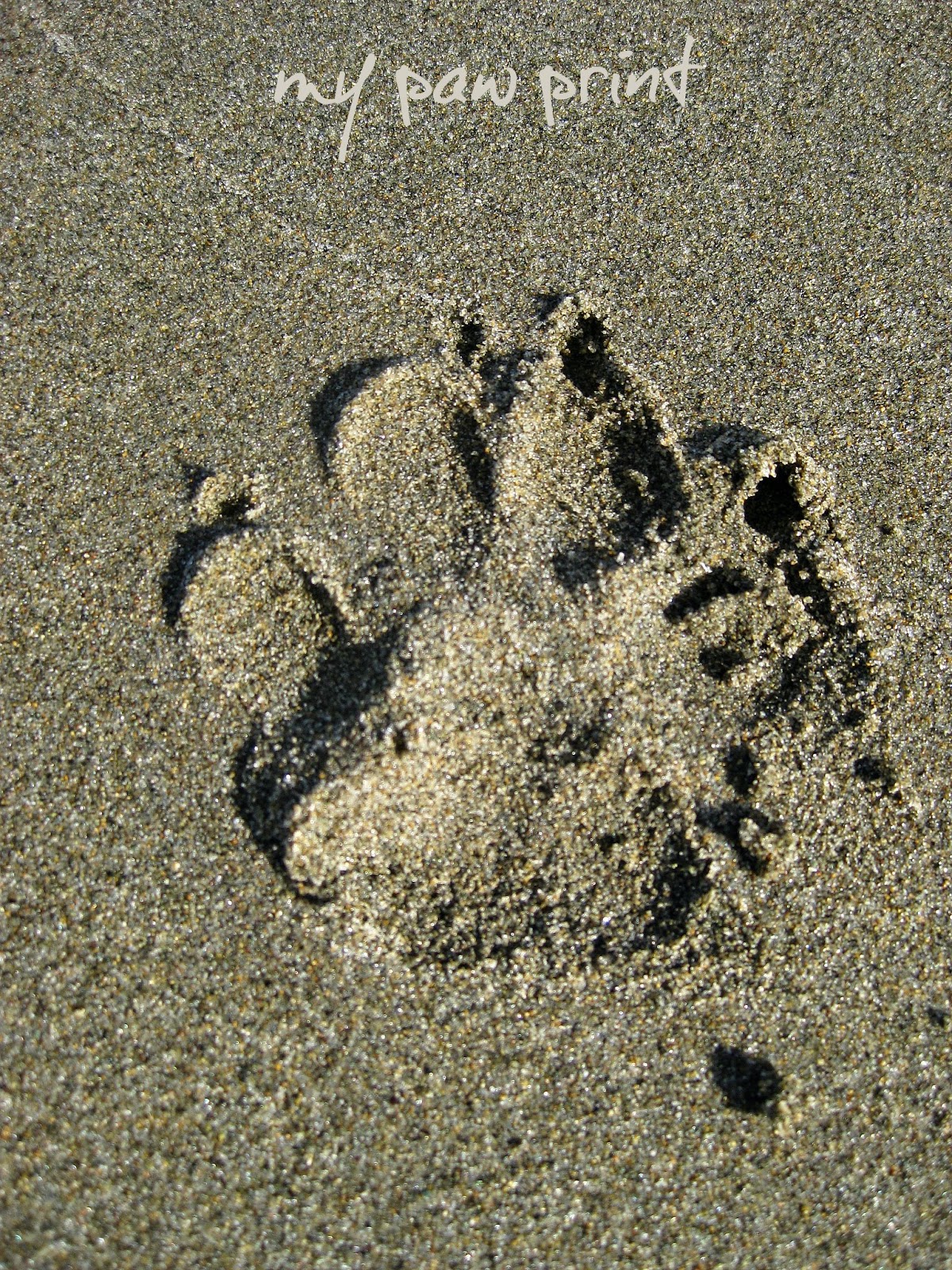 *1 Translation was made by me. It is not perfect. I am not a professional translator and translated the article with the best possible intend without changing the context of the article.